The traditional refrigerant represented by Freon is a strong greenhouse gas that leads to serious climate implications. Stimulated by the excellent cooling performance of plastic crystal materials, barocaloric (BC) cooling received much attention recently as a promising green refrigeration technology. However, problems like high driving pressure and low thermal response remain unsolved, which hindered their practical applications. 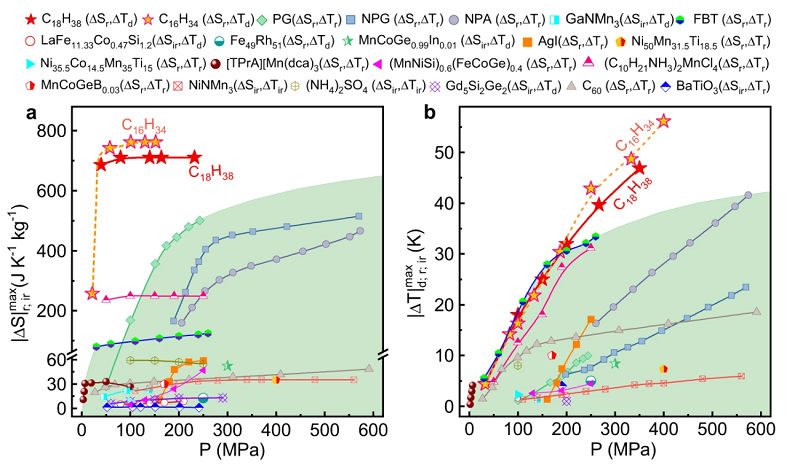 Comparisson of BC performance between CnH2n+2 and the existing BC materials. The maximum adiabatic temperature change (a) and isothermal entropy change (b) as a function of pressure for C18H38 and C16H34, are shown along with the reported BC materials. Image credit: LIN Jianchao

In recent decades, caloric cooling technologies based on the caloric effect have attracted great attention. The caloric effect refers to isothermal entropy change and adiabatic temperature change in response to a variety of external fields, and is often associated with the first-order phase transition in materials. Depending on the types of external fields, such as the magnetic field, electrical field, uniaxial stress, and hydrostatic pressure, the caloric effects are sorted into magnetocaloric, electrocaloric, elastocaloric, and barocaloric (BC) effects, respectively.

Unlike the commercial refrigerants currently used in vapor-compression cycles, caloric materials have little environmental impact. To date, many achievements have therefore been made in a large variety of solid-state caloric materials.

In a new study, published on Nature Communications, scientists led by Prof. TONG Peng at the Institute of Solid State Physics, Hefei Institutes of Physical Science (HFIPS), Chinese Academy of Sciences (CAS), described how they discovered excellent BC cooling performance in n-alkanes with self-developed BC test platform, which provided a new perspective for developing the application-oriented green refrigeration technology.

“It’s safe and green,” explained LIN Jianchao, first author of the paper, “and the cost is low. Current refrigerating exploration tends to use solid-state phase transition materials. Now we have a future with solid-liquid phase transition (L-S-T) materials in mind.”

The material they found is called n-alkanes. By applying a low pressure of around 50 Megapascals, a colossal entropy change of ~ 700 J kg-1 K-1 was triggered. This is comparable to those of the commercial Freon-based refrigerants and at least three times larger than the reported values of existing BC materials driven by the same pressure. Aside from that, the adiabatic temperature change driven under this pressure also reaches the highest value of the existing BC materials.

In this paper, they further revealed the possible BC mechanism. The Raman study and Molecular Dynamics Simulation reveal that applying pressure to the liquid state suppresses the twisting and random thermal motions of molecular chains, resulting in a lower configurational entropy. When the pressure is strong enough to drive the L-S-T, the configurational entropy will be fully suppressed and induce the colossal BC effect.

“We expect more excellent BC performance by evoking L-S-T materials in the near future,” said Jianchao.