Honeywell has announced a new non-flammable refrigerant for medium temperature commercial refrigeration applications with a GWP of less than 150. The arrival of R471A, which Honeywell has branded Solstice N71, could provide a solution to end-users struggling to comply with new standards, including those in the UK, EU and California that restrict refrigerants with a GWP greater than 150 in new systems. 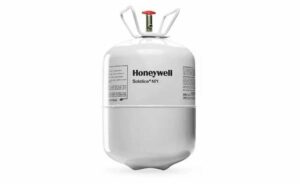 Since January 1 of this year, the European F-gas regulations have banned the placing on the market of new hermetically-sealed commercial refrigerators and freezers from using a refrigerant with a GWP of 150 or more. The same ban applies to multipack centralised commercial refrigeration systems with a rated capacity of 40kW or more. The US Environmental Protection Agency is also said to be considering a similar national regulation that may take effect in 2024.

Although only promoted for medium temperature applications, the new R471A seeks to provide an answer for many premises in the UK and Europe that strictly prohibit the installation of any equipment containing a flammable substance.

R471A has been around for a couple of years and was first mentioned in Bitzer’s Refrigerant Report 21 published in 2020. While Honeywell’s latest announcement only mentions its performance compared to R404A, it has also previously been seen as a replacement for R134a.

“The supermarket industry, along with countless other sectors, continues to face evolving regulations that make maintaining performance and sustainability challenging,” said John Keating, vice president and general manager of Honeywell’s stationary refrigerants business. “We anticipated this latest transition for refrigerants, and we are proud to introduce an innovative, next-generation solution the industry was missing. Solstice N71 is a ground-breaking refrigerant that provides grocers with a solution that is both reduced-GWP and operationally safe, enabling our customers to reduce their carbon footprint and comply with new regulations.”