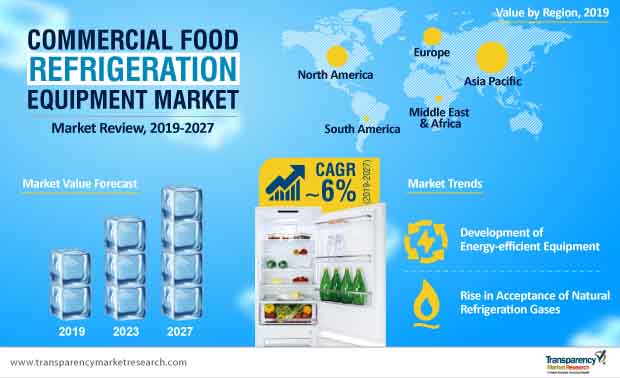 ommercial food refrigeration equipment has various end users such as hypermarkets, supermarkets, convenience stores, restaurants, warehouses and food service industries – with demand continuing to rise. Furthermore, with the rise in the number of restaurants and other food service outlets triggered by the heightened interest in indulgence, the rapid shift in food consumption patterns is also expected to have a positive impact on the development and evolution of the commercial food refrigeration equipment market.

Rising concerns about global warming caused by the emission of greenhouse gases have led to a push for a global phasedown of hydrofluorocarbons (HFCs). The Kigali Amendment to the Montreal Protocol came into effect in Jan 2019, encouraging both developing and developed counties to reduce the emission of man-made greenhouse gases. This has had a direct impact on the global refrigeration market, where the use of natural refrigerants is being encouraged in place of HFCs.

Natural refrigerants, which occur naturally in nature, are seen as an alternative to the synthetic refrigerants already in the market. The underlying trend of using these gases so as to employ lower climate impact solutions has already had an impact on the commercial food refrigeration equipment market as well, with manufacturers looking to develop newer solutions for reduced environmental impact.

According to the World Health Organization (WHO), 1 in 10 people fall sick from eating contaminated food, and food safety is considered a public health priority. At the storage level, prevention of an outbreak of food-borne diseases happens with the storage of food at wrong temperatures. Food Codes set forth by regulatory bodies such as the Food and Drug Administration (FDA) and Food Safety Standards Authority of India (FSSAI) that monitor the retail and food service industries require food to be stored at optimal temperatures prior to use and serving. Commercial food refrigeration is a critical aspect of ensuring the safety of food products and public health safety.

Development of equipment powered by renewable sources of energy

Appliance manufacturers around the world are increasingly focusing on the reduction of energy consumption and shifting towards appliances that run on renewable energy.

Manufacturers in the commercial food refrigeration equipment market are looking at equipment powered by solar thermal energy, which is also a strategy that is gaining traction.

Appliances that run solely on solar thermal power eliminate the carbon footprint of the appliance, making it an environment-friendly alternative to conventional commercial refrigerators.

The current trend of smart appliances, connected by the Internet of Things, has reached the refrigeration industry as well. This has resulted in the development of smart refrigerators for the residential sector becoming popular in recent times, with manufacturers such as Samsung, Haier, and Danfoss already at the forefront. However, the use of smart refrigerators in the commercial sector is low, which is suggestive of opportunities for manufacturers in the commercial food refrigeration equipment landscape.

More information and access to the report can be found here.