Countries of Europe and Central Asia are united in protecting food production, supplies and trade, even during times of war. At the Thirty-third Session of the Regional Conference for Europe in Łódź, Poland, 50-plus FAO members discussed possible paths and approaches for realising this goal and for improving nutrition and food security in the region and around the globe.

The need for a neutral platform for debating current challenges in food and agriculture – among the sectors most affected by the war in Ukraine – was immense, reflected by the record number of countries and delegates participating in the conference. 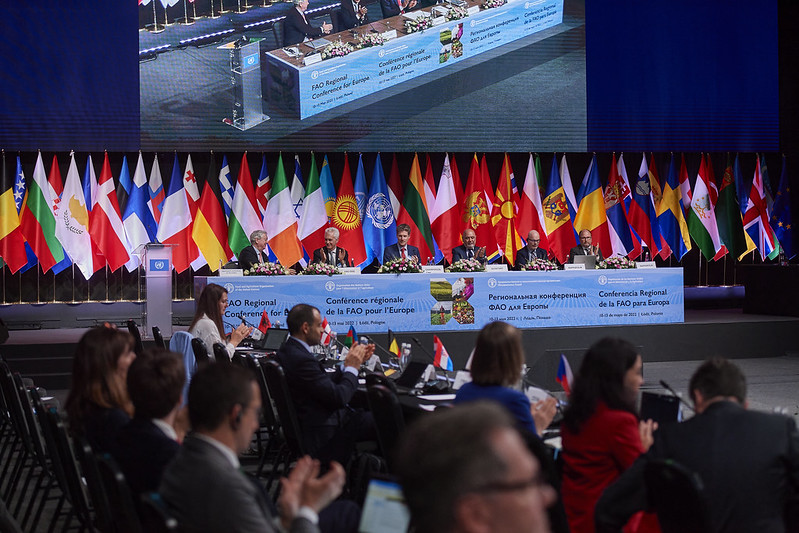 The impacts of the war in Ukraine on global food security should be addressed urgently and prevented from escalating further. Image credit: FAO Official Photo Stream

“The impacts of the war in Ukraine on global food security should be addressed urgently and prevented from escalating further – global food security depends on this,” said FAO director general Qu Dongyu in his concluding remarks read on his behalf. Addressing this, he added that it would only be possible through “joint, coordinated actions and policy responses, including with FAO’s support and through the guidance provided in the Regional Conference report.”

Key topics discussed this week included the social and economic consequences of the pandemic and the war in Ukraine and its impact on global food security (with the Regional Conference adopting decisions on this matter and reaffirming the FAO Council’s earlier action); rising prices of staple food, vegetable oil, and fertilisers and other agricultural inputs; agrifood trade; climate change and its impacts; green agriculture; and malnutrition and unhealthy diets.

The Regional Conference saw a record number of countries and officials participating, as 26 ministers and high-level officials responsible for agriculture and related areas joined in person, and representatives of the European Union, international organisations and the civil society – more than 350 people in total– gathered in Łódź and online for the conference, FAO’s highest-level governing body for Europe and Central Asia. Zbigniew Rau, minister of foreign affairs of Poland, was elected chair of the conference.

“The successful transformation of efficient, inclusive, resilient and sustainable agrifood systems in the region will require your commitment to taking ownership, engaging in political leadership and, most importantly, pursuing peace,” FAO’s director-general emphasised.

Regional conferences are essential for ensuring the effectiveness of FAO’s regional work in the service of members and in defining the organisation’s priority areas of work for the following biennium. The conference report would be presented at the upcoming FAO council session in June.